4 months and growing too fast!

Parker turned 4 months old yesterday!  I can't believe how fast time is going by.  I know it will only go faster so I am trying to enjoy every minute so I did a little "photo shoot" this morning.  Pretty pleased with what I got!

Update:  We had his 4 month check up on April 4th.  He weighed in at 13 lbs. 9 oz. and was 25 1/4" long.  He is at the 20th percentile for weight and 60th for length.  For now he is staying long and lean!  The doctor wasn't too concerned since he is growing at a consistant rate.  We also were given the green light to start rice cereal!  We have fed him a couple times and he seems to be doing well! 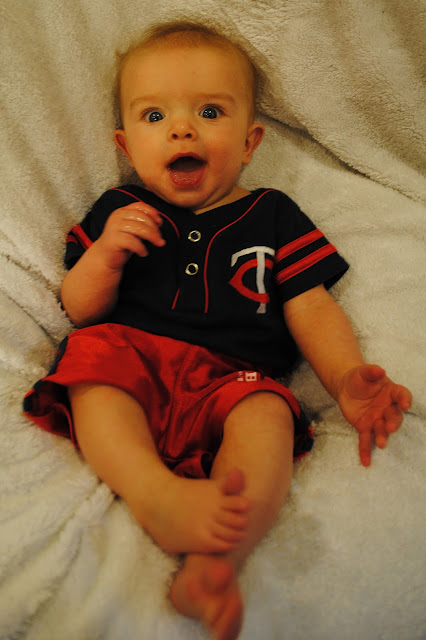 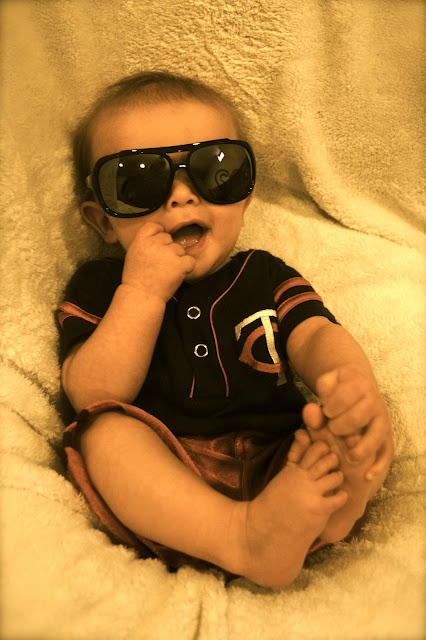 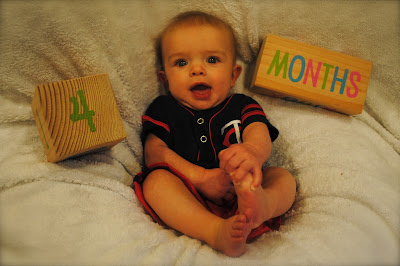 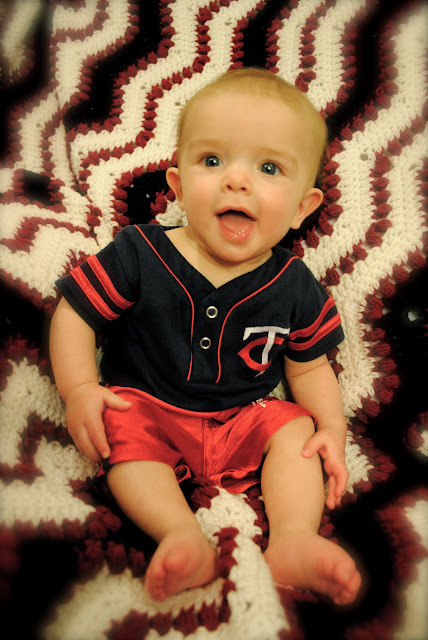 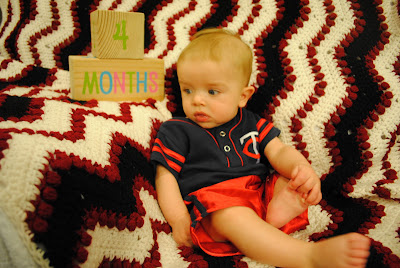 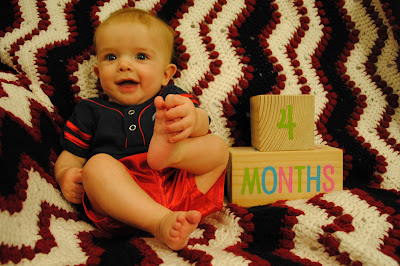 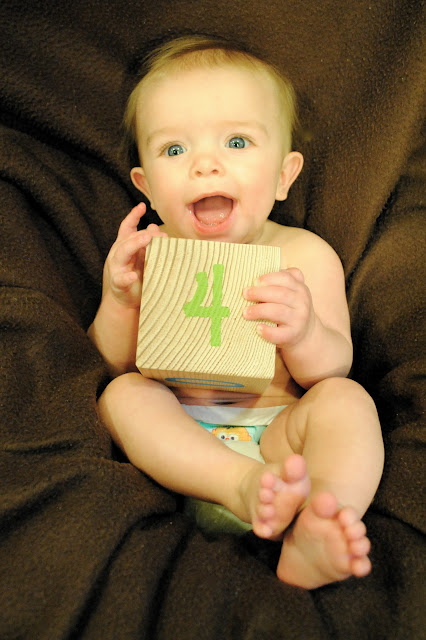 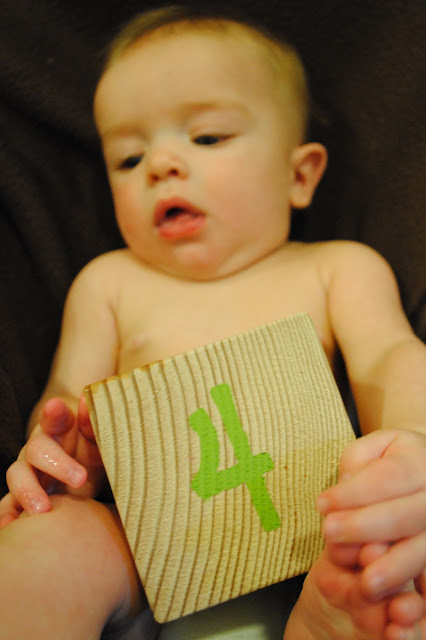 Posted by Lesa Herrmann at 12:25 PM No comments:

Just wanted to share some recent photos.  He is getting so big!  I can't believe he will be 4 months old on Friday! 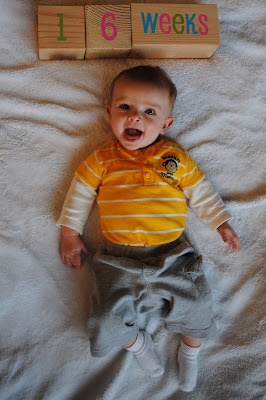 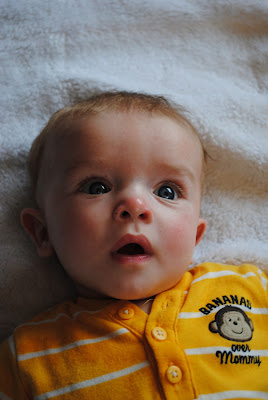 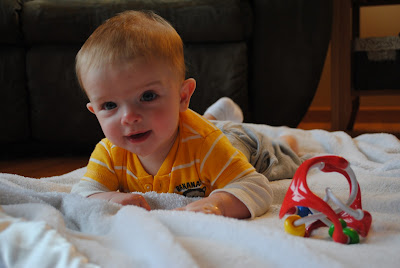 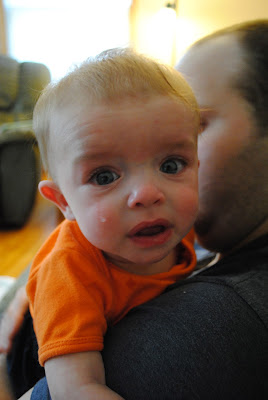 Posted by Lesa Herrmann at 6:58 AM No comments:

The basement is ALMOST done!

We made a lot of progress since my last update on our basement.  The room was painted, the carpet was installed, and the furniture was delivered!  Jimmy and I have mounted the TV on the wall and started to install the surround sound.  We are going to have our first movie night tonight and I couldn't be more excited!  I also found a great square coffee table for $7 at a thrift store that I am going to transform into a storage ottoman!  It is going to be truly fabulous when it's done! 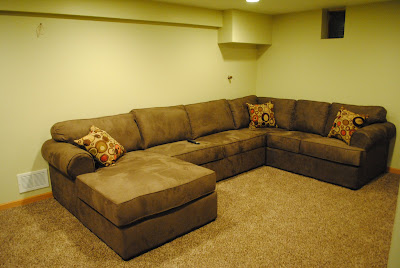 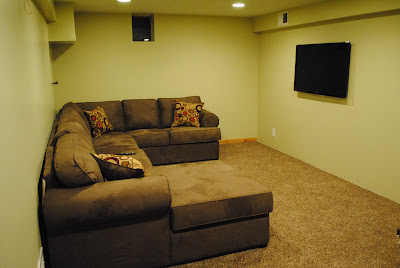 Posted by Lesa Herrmann at 9:13 PM No comments:

Despite the sadness of my Grandpa's passing we did have a few fun moments.  Parker had his first hotel stay!  He did very well being in a new environment.  The hotel had a pool so we checked off another first, SWIMMING!  He loved the water and thought it was fun to float around in his turtle tube. 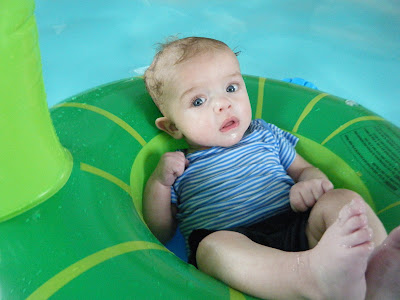 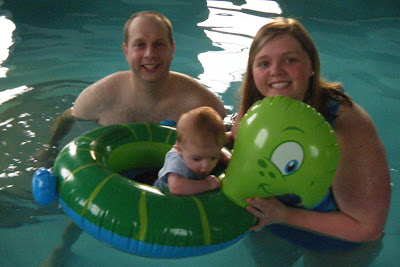 Another fun part was getting two 4-generation pictures.  Since we don't get together very often it was nice to get these pictures. 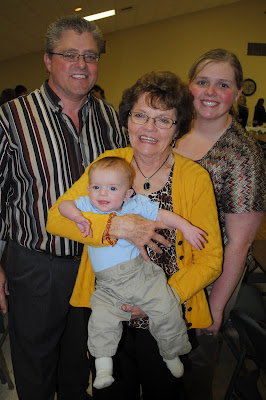 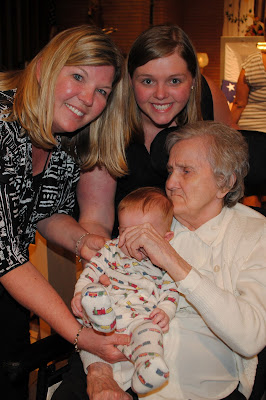 My maternal grandmother just wanted to keep touching Parker so it was tough to get a good picture of us all, but you can tell that is him!
Posted by Lesa Herrmann at 8:49 PM No comments:

My grandpa passed away last week and we travelled to Nebraska over the weekend to say goodbye.  Until 2 weeks ago this would have been a surprise as he was in relative good health for being 85.  I have some amazing memories of him.  Each year as a child I would spend 2 or 3 weeks with my grandparents.  I remember riding in the tractor for hours with him.  One of my favorite memories was driving with him to a bigger town nearby.  He told me all about his time in the military and how he was a paratrooper during the Korean War.  I thought that was the coolest thing ever!  He had so much love to give, which is really amazing when think about all of the kids, grandkids and great-grandkids he had to love (pictured below.)  You would think a man would just run out of love, but he never did.  I sometimes wish we had lived down there so I could have had more time with him.
More than anything, I am grateful that he got to meet Parker before he was gone.  I shared a couple months ago about our trip to Nebraska to celebrate Christmas with my dad's family.  While there we visited my Grandpa and Grandma (on my mom's side)and got pictures taken with them.  This picture was (as far as anyone knows) the last picture taken of him.  I am sad that Parker will not get to know him better, but I will always treasure this picture. 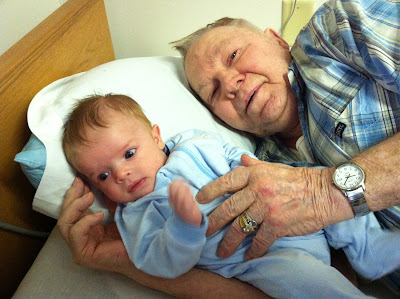 No better way to celebrate a man's life than with his living legacy.
Posted by Lesa Herrmann at 11:20 PM 2 comments:

Our basement project is coming along nicely!  The sheetrock was installed last week and the taping and mudding is happening this week.  We are hoping it will dry quickly enough so they can finish by Friday!  This will give us all weekend to paint!  Next week will be carpet installation, TV delivery and install and finally the furniture gets delivered in 11 days!  Hopefully we can get it all done in time!  We are so excited to have a new family hangout area and a place with carpet for when Parker starts to crawl and walk! 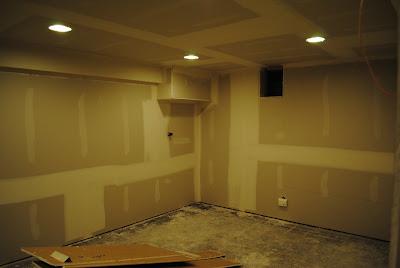 Parker is coming along quite nicely as well!  He unofficially turned 3 months last week!  Unofficially because February does not have a 30th... In honor of this occasion we did a little home photo shoot!  Not quite as fancy as a professional, but good enough for me!  It is so fun to watch him grow up! 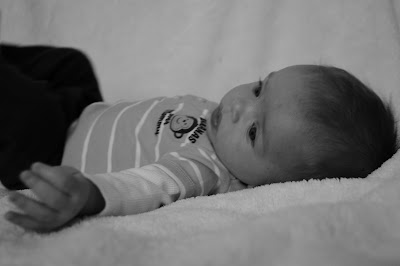 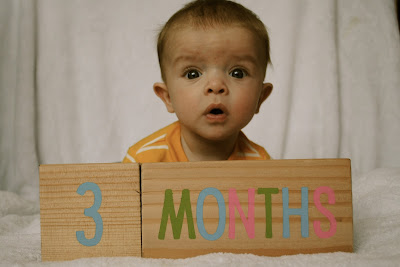 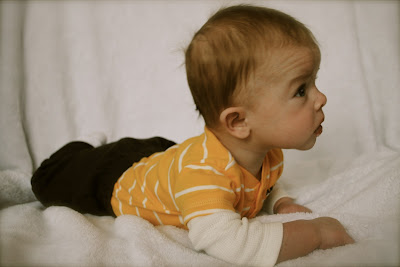 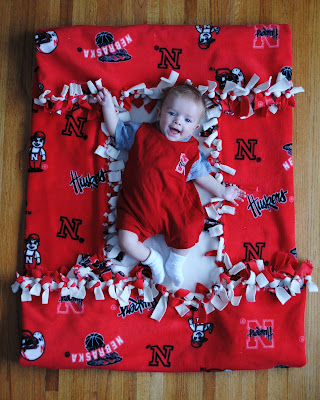 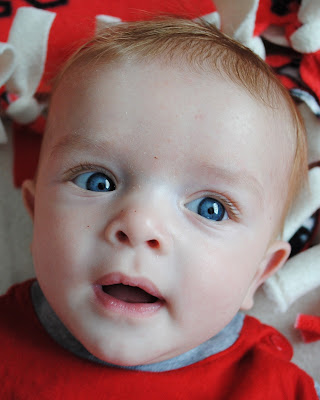 We also got one of our biggest snows of the year last week!  I finally had to get the snowblower out of the rafters!  I decided on Monday we better get some pictures of Parker in the snow since it was going to be in the 50's on Tuesday.  I didn't want to miss my chance of snow pictures during his first winter.  He took it like a champ and I think he really liked his mad bomber hat (Thanks Uncle Sean!) 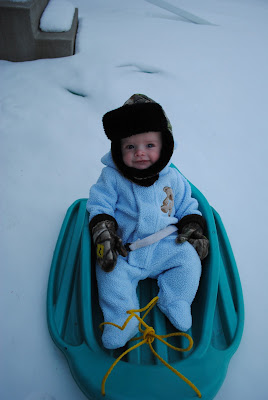 I had mentioned our ECFE classes a few posts back!  We are still having so much fun with our group and got a great picture of them all tonight!  Clockwise from Parker at the bottom is: Ilana, Sophia, Mitchell, Simon, Genevieve, and Willa. 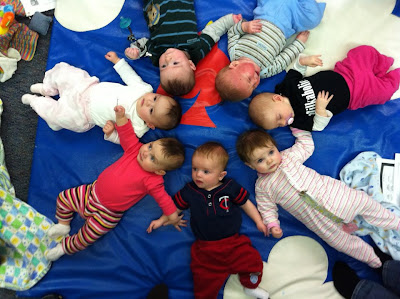 Lastly, in honor of the big iPad announcement today I have to share an adorable picture of Parker and Jimmy.  I think he is going to follow closely in daddy's footsteps on the Apple addiction! 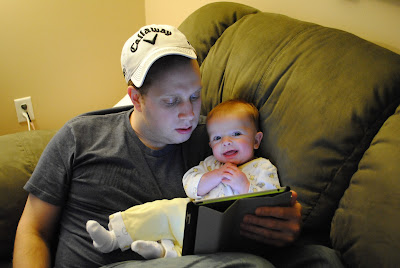 Hope you all have a great week!
Posted by Lesa Herrmann at 10:30 PM No comments: