The Christmas season always goes by way too fast.  Sometimes I wish we could celebrate all year!  My Grandma is visiting from Nebraska and she came over for breakfast this morning.  She hasn't seen our house since we got married so it was great to be able to show her all the upgrades we have done, including Parker's room.  After that, we went to Jimmy's parents to celebrate with his family.  It was so much fun and we were so blessed with their generosity.  We got home this evening and still had a lot of prep for my family's celebration tomorrow.  The apple and pumpkin pies are baked, banana bread is cooling and pudding pie is chilling!  Will all the business I did get a chance to take some Christmas eve pictures! 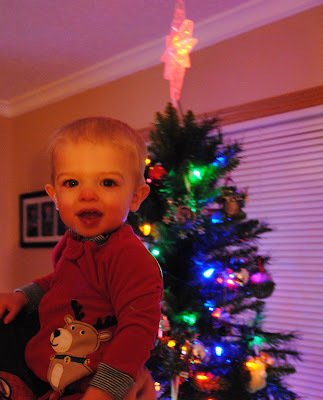 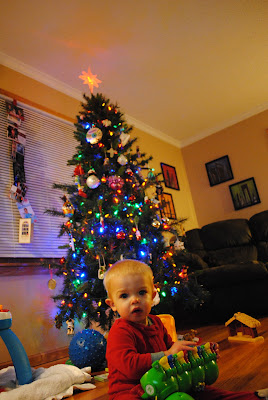 I hope our holiday pictures made you smile!  And I hope you all have a fabulous Christmas!
Posted by Lesa Herrmann at 9:04 PM No comments:

I haven't posted in a while because we have all been fighting some sickness! We all got a stomach bug a couple weeks ago and then we got a terrible cold/cough! We are all doing much better now which I am so thankful for. Just wanted to drop a quick note as we headed to our first Christmas gathering. Check out my damper looking dates! I hope you all have a fabulous holiday season. I can't wait to share more happy holiday pictures. 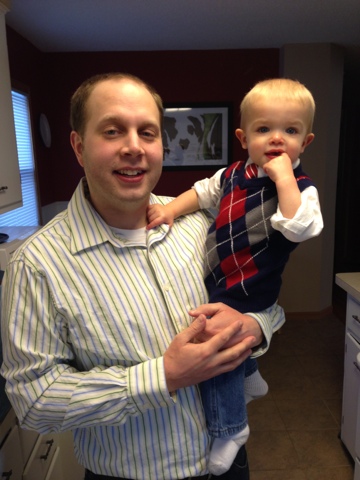 Posted by Lesa Herrmann at 3:51 PM No comments:

We celebrated Parker's birthday this weekend with a big party!  It was a construction theme and I have a tendency to go all out for things like this... We had over 20 family members make it out, which was such a blessing.  It also made for tight quarters since we don't have a huge house.  We were very thankful we had a finished space in the basement for guests too!  This post is a bit of photo and video overload so I hope you are prepared!

We created a slideshow of some of our favorite photos of Parker over the last year and played it at the beginning of the part.  It is almost 4 minutes so it will take a bit, but enjoy!
A lot of prep went into his party (maybe too much!) But, I had lots of help from Jimmy and my mom also helped by cooking some of the food. 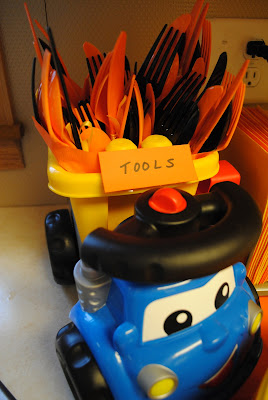 I made all the cakes for the party.  Parker's smash cake was supposed to be a cone, but it looks more like a volcano.  I still think it's cute! 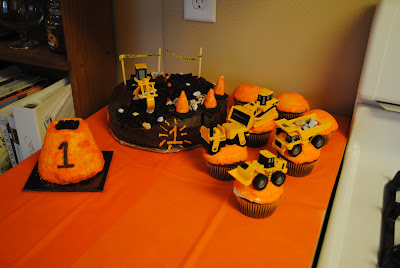 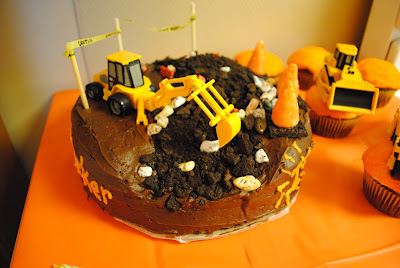 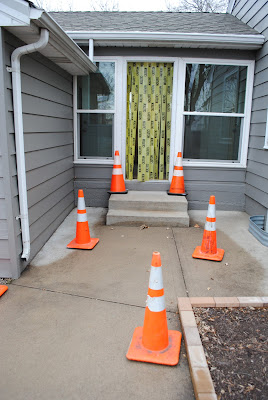 We started with lunch.  The menu was sloppy joes, ham and cheese, chips, coleslaw, marshmallow fruit salad and a super cute Spongebob edible arrangement that Jimmy's parents got for Parker. 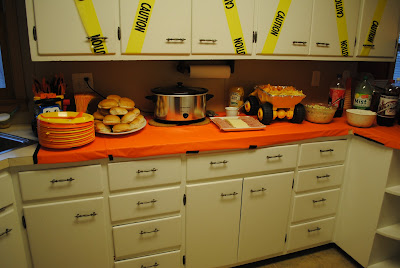 I made a couple of shirts for the party because I was having trouble finding one in a store. 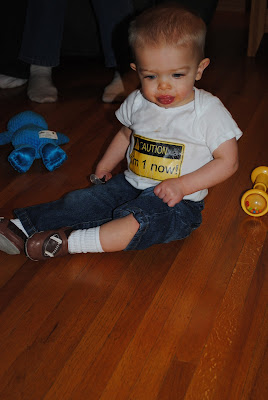 Then we did the cake smash!  The video is below.  It is kinda long again (4 1/2 minutes edited down from 10) but it is pretty cute!  It took him a while to really get into it.  he spent several minutes stashing it on his highchair seat...Eventually he actually got some in his mouth!  I have added pictures as well if you don't want to sit through the whole video. 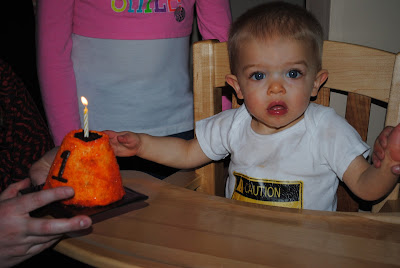 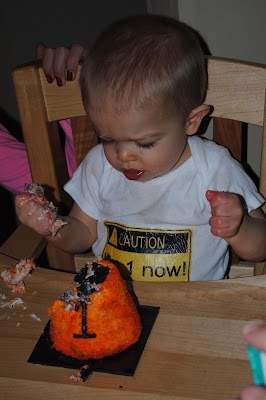 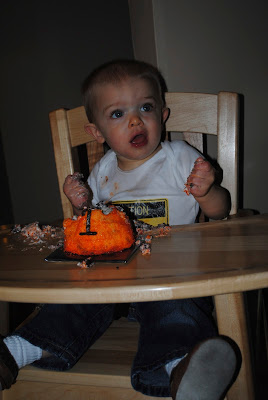 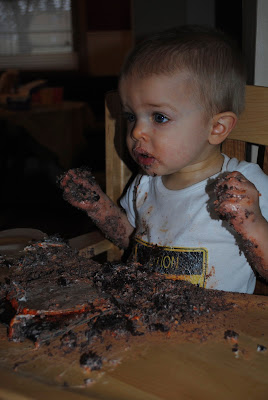 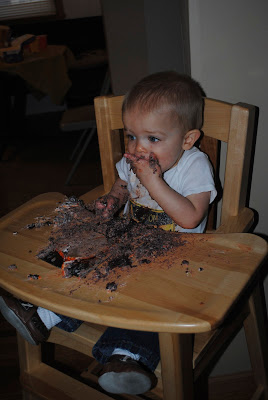 He didn't have much interest in opening his presents and the ripping paper scared him a little so he just played with what we opened. 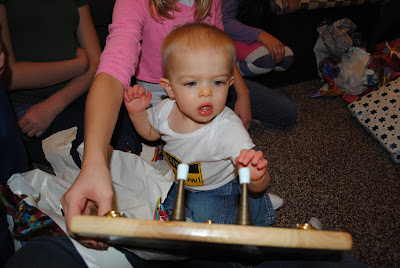 Here is the whole group of guests!  Thank you so much to all of our awesome family that took the time to celebrate.  Parker won't remember this, but he will love to see a picture of all the people who love him! 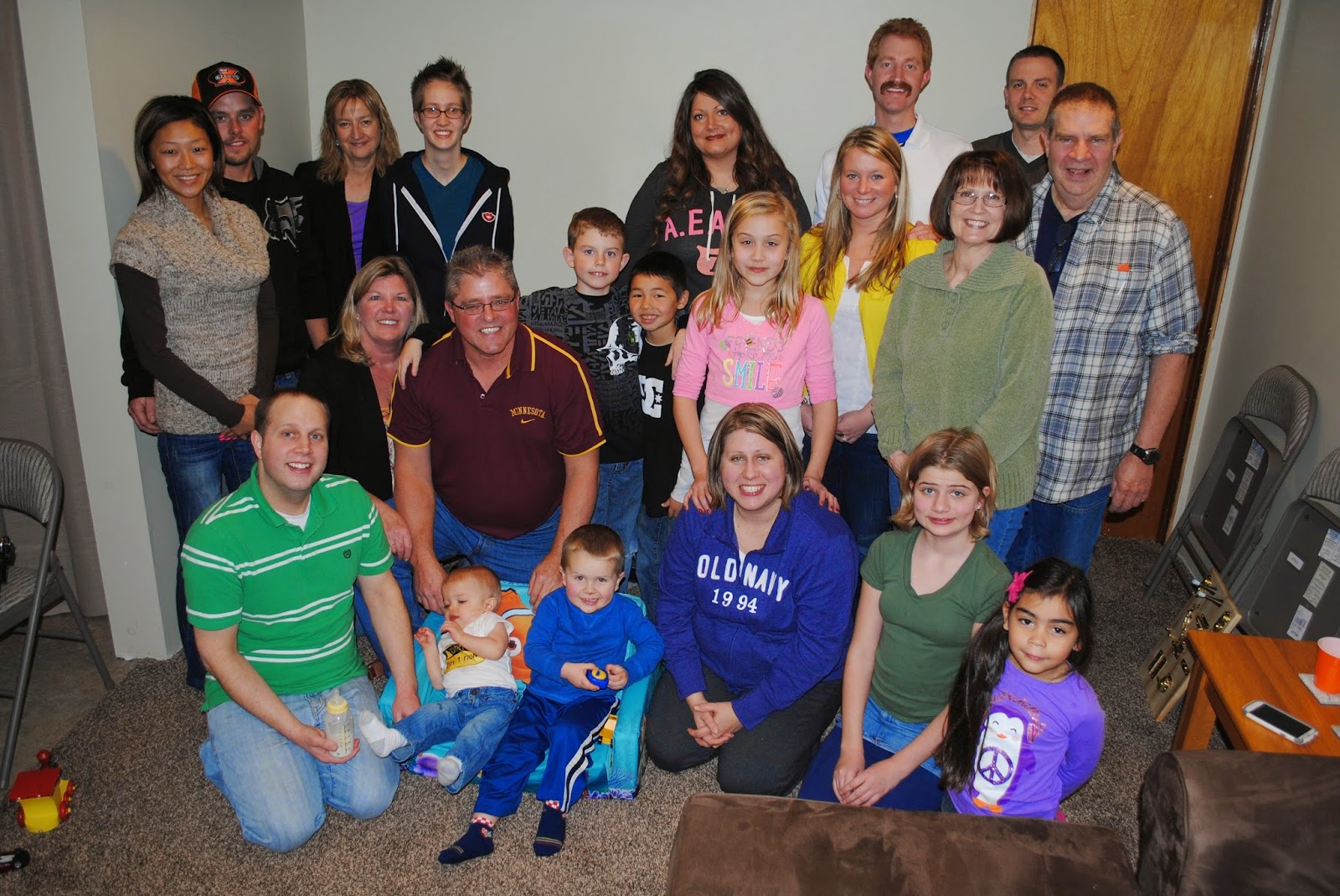 Parker's actual birthday was on Friday.  I took the day off to spend with him, but it was pretty low-key since we had his party the next day.  I was still awake at 12:10 am that night working on party prep so I went into him room to snap a quick picture at the exact time he was born.  He was sleeping so you will have to excuse the quality. 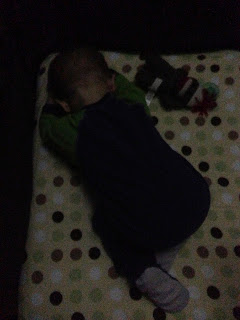 We went to the Children's Museum in St. Paul with our friends Daisy and Isaac.  It was the first time I had been there so I wasn't sure what to expect.  They have an area specifically for kids under 4 so we spent a lot of time in there.  The picture below was in their "winter" area.  He stood here for a while checking out what was happening outside. 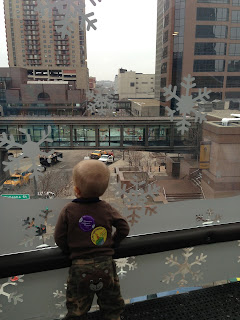 They also had a great water area (and you know how much Parker like water!) Thank goodness for the smocks or he would have been drenched! 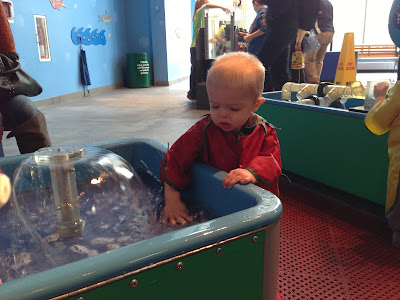 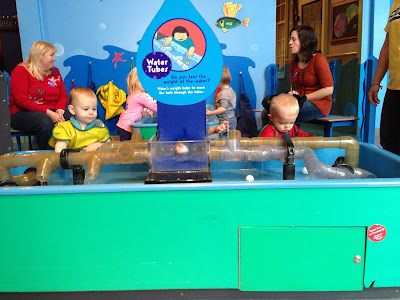 Both Isaac and Parker loved splashing around!

Posted by Lesa Herrmann at 1:44 PM No comments: