I did not expect to take this long to post an update about our baby girl, Esme June, but she needed a little extra help.  Let's just start with her arrival!  I took one last belly picture the day before our scheduled c-section.  This was 37 weeks, 1 day. 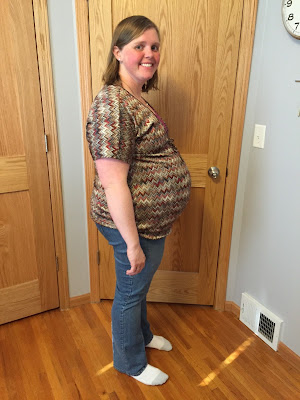 My surgery was scheduled for 9:30 am with an 8:00 check in.  This gave us enough time to drop Parker off at daycare before heading to the hospital. 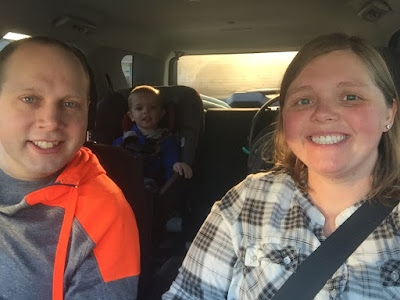 I labored for a bit before Parker's c-section, so this was a whole new show.  We arrived and I got to put on a fancy surgical gown! 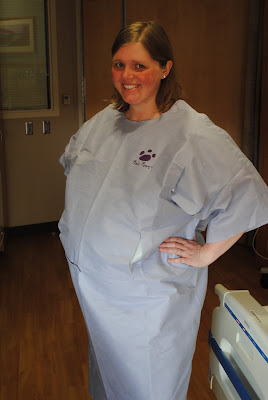 Jimmy got to done some snazzy blue scrubs too. 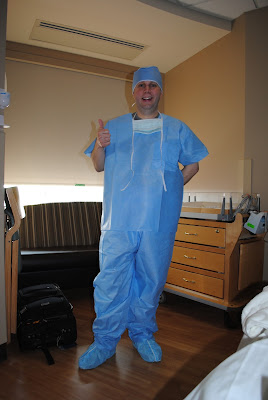 Since I didn't have anesthesia yet, I walked myself in to the operating room and climbed on the table.  Jimmy waited just outside until they had me totally prepped and started surgery.  They put in the spinal and I was totally numb from the chest down within about 10 minutes. 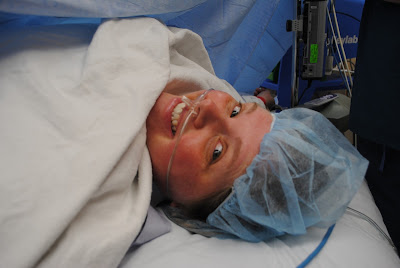 Esme June Herrmann was born at 9:53 am, weighing 5 lbs. 11 oz., and 19" long.  She was pretty tiny, just like we thought she'd be.  She was very vocal the whole time they were cleaning her up.  She made sure we knew she was there!  "Esme" is just a name I came across when doing some research and it really stuck out to me.  I was short and simple, which is what we were looking for.  I also wanted something that was unique, but not weird.  "June" is in honor of Jimmy's paternal grandmother, who also had it as her middle name. 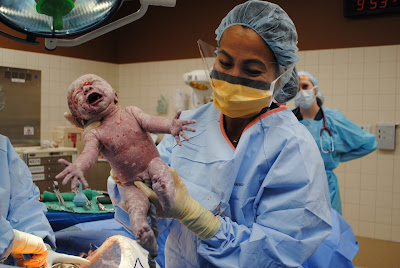 Parker's screaming picture with his stats is on the right and Esme is on the left. 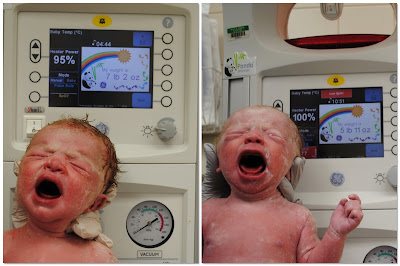 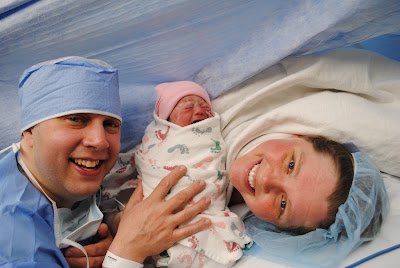 I got to do skin-to-skin with her right out of the operating room this time which became pretty special since it was only about an hour before they had to take her away. 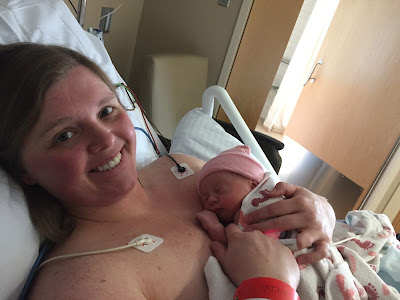 Jimmy noticed that they kept bringing in warm blankets and knew something was up.  She was able to nurse pretty quickly, but was not able to keep her temperature or blood sugar up.  About 11:30 they decided to take her to the nursery to try to get both of them up.  Those two things tend to compete with each other, which can be tough to overcome without intervention.  Her body had to work hard to raise her temp, but that caused her blood sugar to drop.  Shortly after that it was determined she should be admitted to the NICU.  Jimmy was able to take pictures for me to see since I was stuck in bed.  They started by putting on electrodes to track her heart rate, breathing and oxygen. 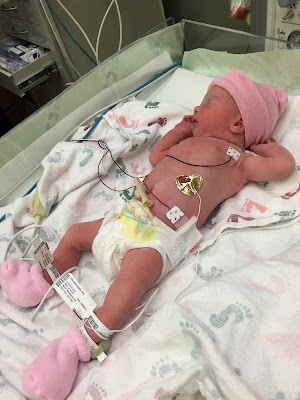 Shortly after moving to the NICU they noticed rapid breathing and did an x-ray.  They found she had fluid in her lungs, also known as transient tachypnea.  They treated this by starting CPAP at 1:30 pm.  This can also be indicative of an infection, so she was started on a 48 hour round of antibiotics. 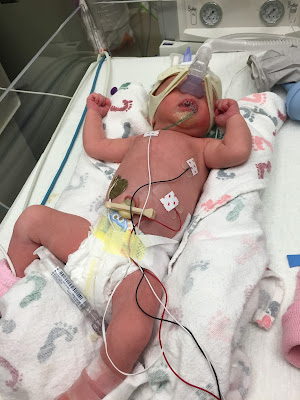 Parker was on his way when we found out she was being sent to the NICU.  We were hoping they would get to meet on the first day, but that just wasn't in the cards. 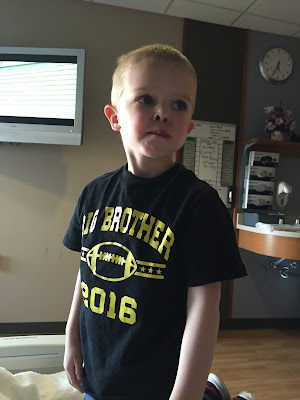 We decided to give him his big brother gift anyway, which was his own musical giraffe, a Twins t-shirt and vanilla cupcake goldfish.  He was inseparable from the giraffe right away! 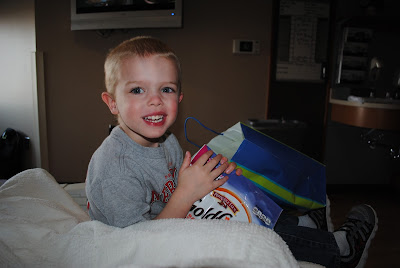 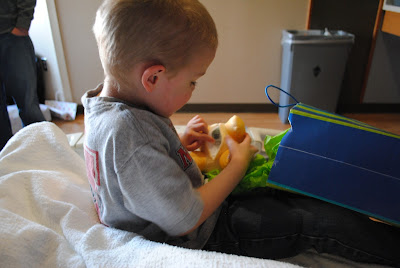 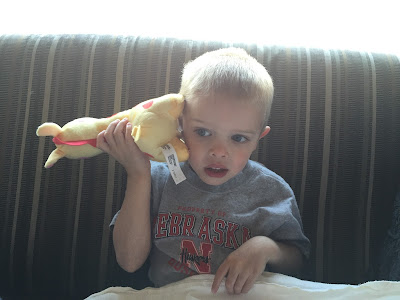 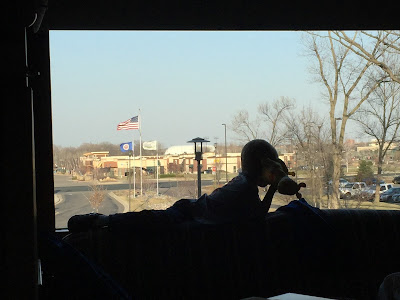 At least I got to spend some time with my boys since I was stuck in bed away from my girl. 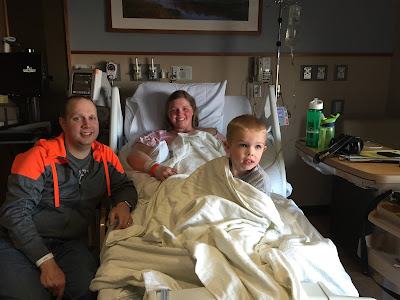 They finally let me get out of bed at 8:00.  I was trying not to be pushy about it, but I wanted to see my baby!  I was able to get up and walk around pretty easily, so we were wheeling down to see her by 8:30.  I couldn't contain my excitement and had to take a picture! 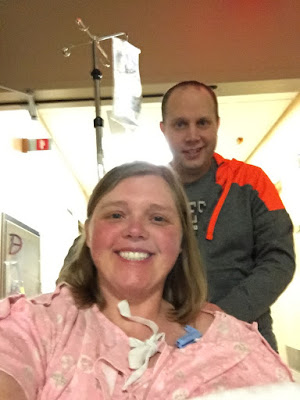 It was so hard to see her hooked up to so many machines, but then they offered to let me do more skin-to-skin with her and it cheered me right up!  I was able to hold and snuggle her for almost 45 minutes, which made the previous 9 1/2 hours disappear from memory. 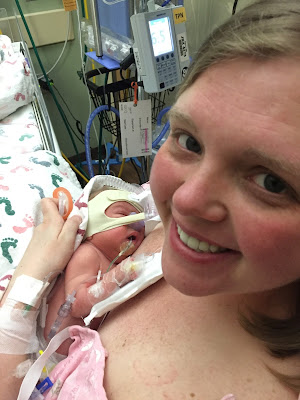 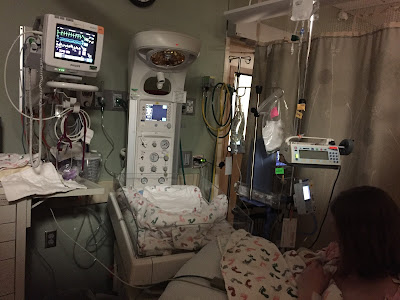 Then they gave us the wonderful news that they would be able to remove her from the CPAP and the feeding tube!  Her oxygen saturation leveled off and she was breathing normally within a couple minutes.  Seeing her face was the perfect ending before heading back to our room for the night.  I was still wheel chair bound for movement outside the room, so I didn't make any more trips, but was able to start pumping to try stimulate milk production. 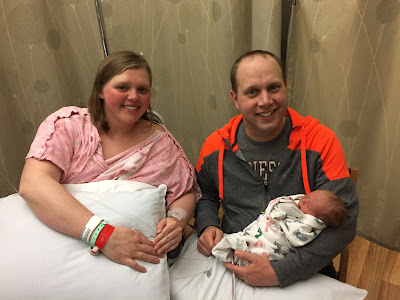 Up Next: Esme's Keeping us on our Toes Already!
Posted by Lesa Herrmann at 9:53 PM