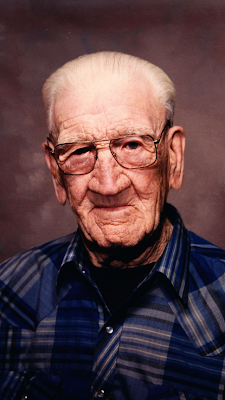 The above picture is my great-grandfather.  Joseph Emory Buxton.  He was born on this day, April 30, in 1900.  Everyone called him Emory.  He was the source for Parker's middle name.  He passed away in 2002, at 102 years old.  My dad could probably tell better stories about him, but I will share how I remember him.

Growing up, we always made a trip out to his house whenever we were in Nebraska.  The earliest memories I have are being a bit frightened and thinking the house kind of smelled strange.  I also thought it was weird how much hair was on his ears!  We would go out to his pond and see tadpoles as big as my head (or so they seemed.)  As I got older I started to appreciate the life experience he had.  He had lived through the invention of cars and TVs, two World Wars, the Great Depression and countless other amazing things.  He was so sharp too, it seemed like he could tell you every detail of an 80 year old story.

I don't remember much about my great-grandma, but I am told that when she got sick Emory did everything he could to help take care of her.  My dad will have to correct me if I get this story wrong.  I remember more from hearing it retold than actually witnessing it.  We were going there for some holiday.  By this time my great-grandma was no longer able to cook (I think) so Emory took on the task.  It did not end well, as I recall there being a lot of black smoke and such in the house when we got there.  Something was burned and burned bad!  He cooking skills improved through the years though.  My favorite memory was when I was maybe 13?  That made him about 98.  He had pulled out a frozen apple pie to thaw and was getting ready to put it in the oven.  He grabbed it of the table, but lost his grip and the whole thing flopped upside-down.  It didn't seem to faze him at all.  He grabbed the empty pie tin and scrapped the whole pile, broken crust and all, back into the pan and put it in the oven to bake.

If nothing, he was resilient.  Long before we knew that Parker would be "Parker," I knew his middle name would be Emory.  It is different and unique and gives him some character.  I wanted Emory to be remembered, and I hoped that Parker would have many of the things that make me smile when I think of my time with my great-grandpa.  They were both born on the 30th and I didn't think about that until today.  111 years 7 months separated their births.  I wish he was still here.  I think it would have been fun to know him as an adult and get to talk with him more about his life.  I will just have to make memories with my new "Emory." 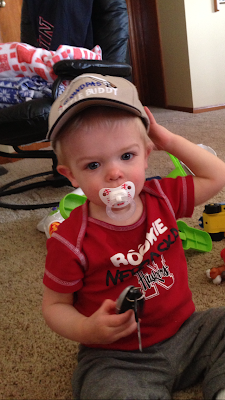 Posted by Lesa Herrmann at 7:20 PM