Esme is one year old today.  She finally started crawling on her knees this month, can sit herself up and is pulling to standing on a regular basis.  Just last week she also started cruising along furniture, so walking shouldn't be too far behind.  She is sleeping really well, but occasionally fusses a little when we first put her down.  She can easily be soothed with a pacifier when she stirs in the middle of the night.

She weighs in at 21 lb. 12.5 oz. (78th percentile) and is 30.5" long (90th percentile.) We switched her over to mostly 18 month clothing.  We still need to get some more pajamas, but then we will be set for the summer.  She is still in size 4 diapers during the day but we are using size 5 at night.  We started transitioning to whole milk a couple weeks ago and are just burning through the last of the formula.  She usually has 4 bottles per day and is eating 3 meals. She has gotten a little better with self feeding snacks, but doesn't do well with most foods yet.  We've tried so many sippy cups with no success, but she did start drinking from a straw in the last day or two.  She still will not pick the cup up, but has never held her bottle without help either.

She is getting very vocal and makes several consonant sounds.  She has said "mama" and "dada", but we aren't sure they are directed towards us.  She has started clapping for us when we ask her to and when we do it.  12-15 months is usually when imitating activities start to rev up, so we will be looking for that as well.  We are waiting for the rest of her 1 year pictures to come back from the photographer and I will share those when I get them.  Here is a video of all her weekly pictures, which shows how much she has grown. 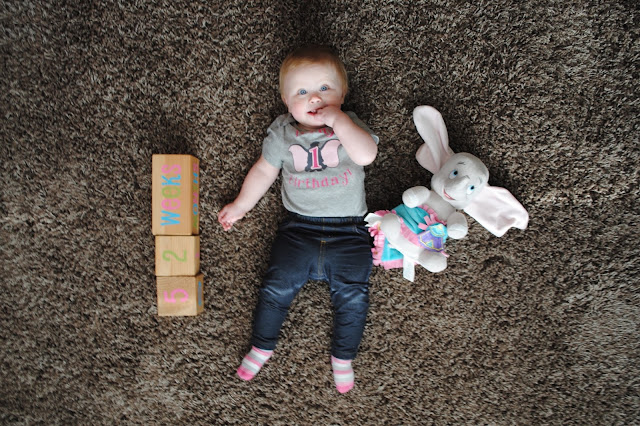 She's been obsessed with the blocks for weeks, so I stopped trying so much and just let her play. 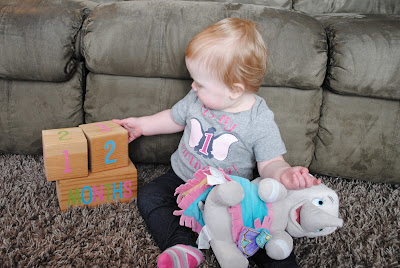 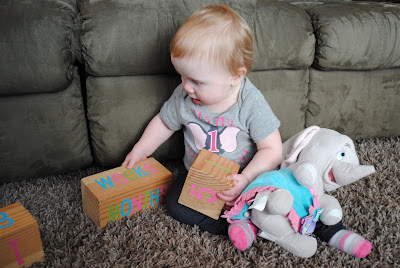 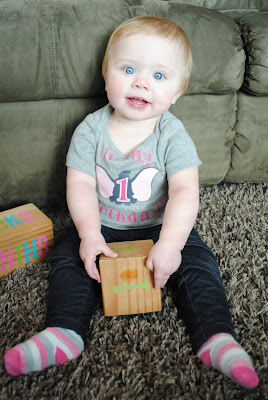 Posted by Lesa Herrmann at 9:09 PM