Remember that laptop battery I got replaced yesterday? Well, we were having trouble getting it to charge and I assumed it was the cord. I made another Genius Bar appointment for today to make sure. I finally got it to charge so I decided not to move it from the spot on the kitchen counter. I opened the cupboard above and a bottle of hot sauce fell out, leaving this lovely dent. 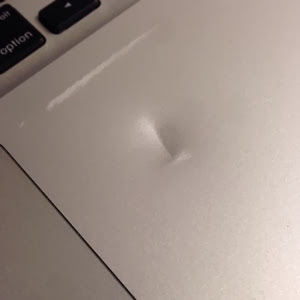 It seemed pretty innocuous and I even sent Jimmy these texts. 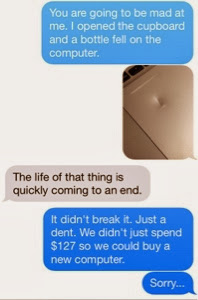 I love the part about not breaking it. After getting home from our playdate I realized it was acting funny so I went to reboot and it wouldn't.  I kept my appointment with the Apple Store hoping they could fix it, but it turns out that lovely dent is right where the hard drive is.

Ugh, my heart sank. I was hoping to get some more time out of it with a new battery and then I essentially murdered it. We could replace the hard drive and power cord, but putting the money into it seems wasteful. It has lasted us a very long time and we were planning to upgrade in a year or so anyway (just what happened with my totaled car!) It looks like a new computer may be in our future. Luckily, we are pretty good at backing stuff up so we should be able to pull everything from the cloud. All I really care about are pictures and videos of Parker and I am confident they are there.

I was able to laugh a little bit later tonight. The bottle that fell was a .69 generic hot sauce that we grabbed "just to try" at the grocery store last night. I guess this is a lesson in budgeting and frugality as well. Just say no next time, it may save a bigger headache!

On the bright side, the amazing folks at the Apple Store refunded my battery! They didn't have to do that, but I also wasn't surprised. We have gotten nothing but stellar customer service from them and will remain loyal. Makes it $127 easier to pull the trigger on a new one.