The long awaited MRI was this morning.  I was so nervous in the days leading up to it, but was overcome with calmness this morning.  I know many of you have been thinking of us and praying for us and I am so thankful for that.  Parker couldn't eat or drink anything prior to his scan this morning so we let him sleep as long as possible.  We made our way to Children's Hospital in Minneapolis for an 8:30 check-in.  Parker was doing pretty good at this point, he wasn't digging around for snacks at all! We distracted him with Color Crew (baby channel) and he liked the lighted x-ray board they had in the waiting room. We were a bit delayed getting to the sedation room, but not too bad.  You could tell he knew something was up.  He was very clingy and just wanted to sit and snuggle (not complaining!) 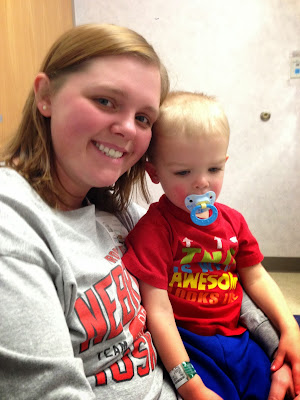 Jimmy got the lucky job of holding Parker for his IV and blood draw.  We needed to get some labs done for another clinic so it was nice to only have 1 needle poke.  As you can imagine, Parker was NOT a fan. 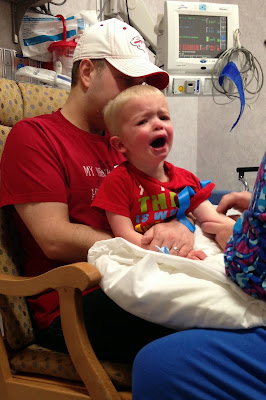 Once it was in and all wrapped up he adjusted quickly. 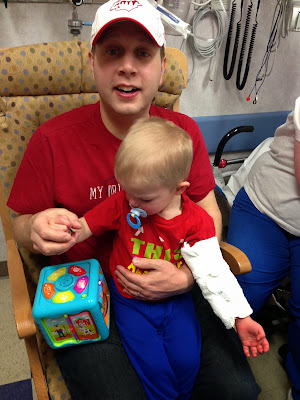 After this I carried him into the MRI room, couldn't bring the camera with.  We set him on the table and they injected the sedative.  It had a very quick effect and he was out in no time.  They sedated him just enough so he wasn't moving.  He was still able to breath on his own.  I thought I might cry when they put him under, but I held it together and just got a little misty.  We gave him some quick kisses and went back to the waiting room.  About 40 minutes later they wheeled him back out and we went to the short stay unit.  He looked so peaceful, just like he was sleeping! 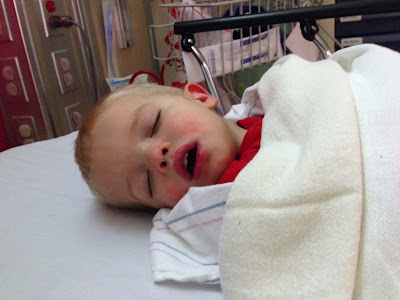 A nurse stayed with us until we were discharged.  It only took about 15 minutes for him to start waking up.  I was very surprised by how quickly it happened.  He was motionless, then 2 minutes later was awake and wanting to drink some water.  I held him for about 15 minutes as he continued to wake up and get something to eat.  I didn't get any pictures, but we took this short video.
Jimmy and I had to get labs drawn after Parker was discharged so it was a total of about 4 hours at the hospital.  Not too bad and Parker really was a rock star!  Not sure when the results will be back, but I am not expecting anything abnormal.  I am just glad to be done.  Hopefully we are approaching the end of specialty visits, 4 therapy appointments a week is plenty!  Thanks again for all your thoughts and prayers!  I hope you have a great holiday next week as well!
Posted by Lesa Herrmann at 6:16 PM