It's Parker's first election!  I was hoping to get an "I Voted" sticker to give to Parker, but our polling site doesn't give them out.  All we get is a sign saying we can go to City Hall and get one...  Since it is projected to be a close race we watched a lot of the coverage on CNN tonight. 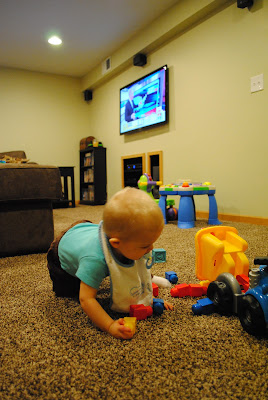 With so many odd "predictors" out there, I thought it would be fun to see what Parker would predict.
So, that didn't turn out as I had hoped.  He hit the blue block, but didn't pick it up.  After reviewing the lego choice he clearly picked up the red one first so I guess we will say he is predicting that Romney will win.  I guess we will wait and see!
Posted by Lesa Herrmann at 9:04 PM